When hearing me speak about fashion events, launches, meet and greets or glamorous parties, one would actually think I’ve physically attended every single one of them, when in fact, I’ve observed and “took part in them” behind my laptop whilst lying in my bed with my comfy pj’s on, but let’s not focus on that.

Naturally, when the lovely Yasmina from Fashionmintea announced on her instagram that the Banana Republic Summer 2016 collection would be shown in Morocco Mall and she’d be attending, I had to take part in it. The fact that the event was on a Thursday evening when I had to wake up at 6 a.m the next morning to go to work in another city didn’t stop me at all, I was determined to meet new people or even make new friends that share my passion.

After a one-hour journey with the train to Casablanca where the event took place, We (of course I dragged my poor brother with me, I mean, hello ootd’s and security blankets) rushed to Morocco Mall and found the Banana Republic store-we were so punctual my Dutch friends would be proud-but the event didn’t even start. After checking out other shops whilst waiting for the main event to start, we also snapped some photos in front of the cool banner which I of course posted on instagram.

The actual event started a bit later than expected, and after Yasmina arrived and kindly took photos with us, it was time to mingle with others. Being quite the anti-social person that I’am, I really tried to get out of my shell and talk to random strangers by complementing certain pieces of their outfits (being at a fashion event didn’t make it that hard, and compliments never offend anyone as far as I know), but gave up after two or three attempts and just carried on chatting with my security blanket (aka lil bro).

Waiters were serving light refreshments and drinks throughout the event, which was very convenient for people who actually ate, but I was already chewing gum and wearing lipstick to be bothered (my stomach disagreed firmly though). The shop was not that big but thank goodness it wasn’t very crowded so it kept the mood pleasant and nobody bumped into one another.

I know this is such a cliché, but Yasmina was seriously the sweetest! She brought everyone together and made sure we had a good time. Her beautiful dress was of course also from Banana Republic. 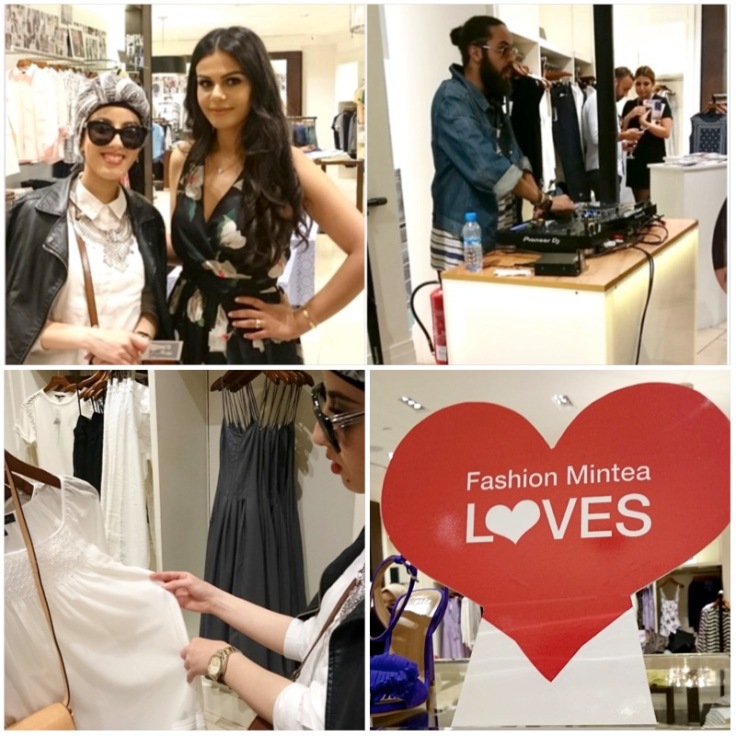 Moving on to the reason behind this whole event: the fashion show. The show was modelled by three ladies and three men with each one wearing two looks. I tried to take decent photos of the ladies but because we all had to gather around one tiny spot to actaully see all the models, and actual photographers moving from left to right-also, the lighting was not my favourite-this was what I ended up with, so excuse the bad quality.

This model’s first look (left) was very summery due to the print as well as the light fabric. I actually love the colours they mixed, it was a light cyan with a scarlet leaves’ print. This was the only time she stopped twirling and I could get a still photo of her, but she did show what this dress was all about, girly and very appropriate for the upcoming months.

The second look was too dull for my taste except for the chic vest. I wouldn’t style it that way but it does show how it could elevate a look and make it sharp. The heels are too pointy and low for my doing. 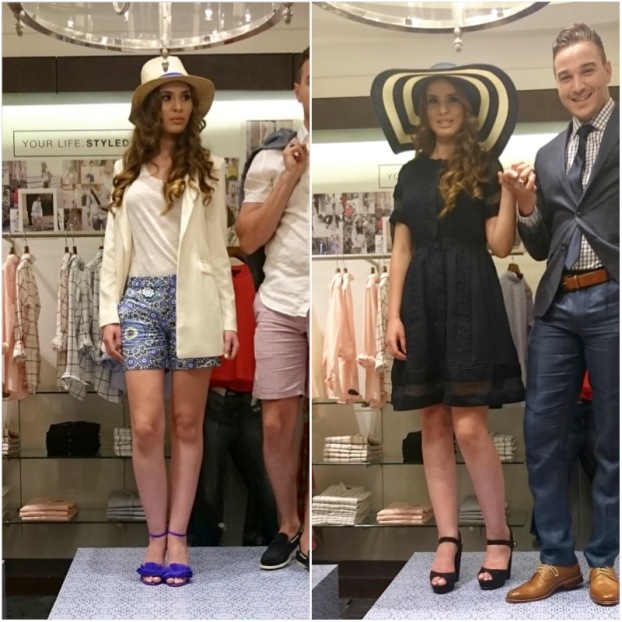 This model’s first look (left) was interesting. I think the tile-inspired shorts are adorable and would actually consider buying if they were trousers instead. With that being said, the rest of the look felt too safe, I mean, I wish they took some risk and styled it with another top or an unexpected vest. The sandals are cute, but not with these shorts.

The second look was fine. Stylig a black dress with black heels and a hat is not rocket science, but the point was to showcase the new summer pieces instead of the way they were put together, so the dress alone was cute. 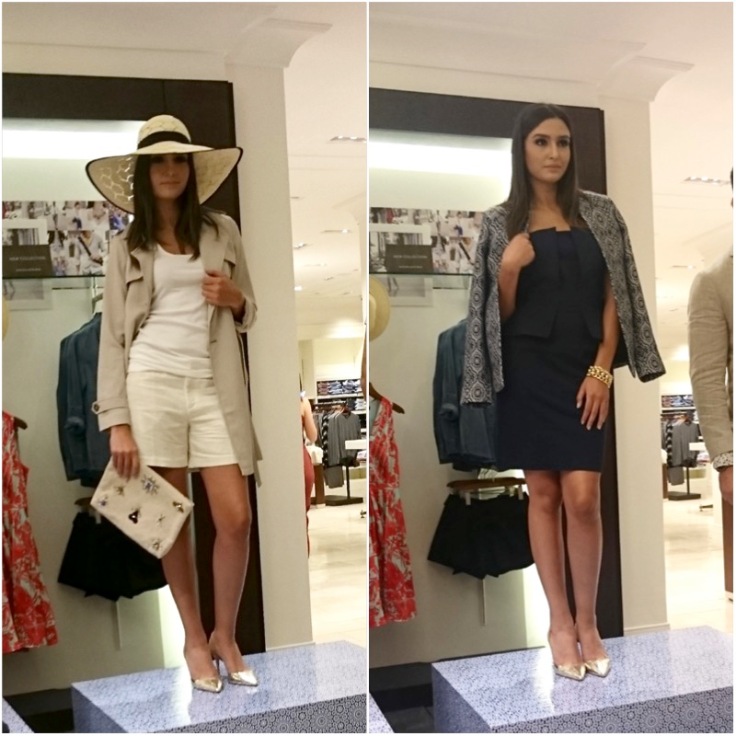 This model’s first look (left) was all over the place in my opinion, considering the fact that this was a collection for Banana Republic’s Moroccan shop, why would a trench be a part of it? I mean, it’s not like it rains during summer here. Again, the heels look to dull to be worn by a young stylish woman, and the rest of the pieces were fine.

Her second look though was much better. I loved the bracelet she wore, I know you can’t see it very clearly but it sparkled so much it grabbed my attention immediately. The dress fitted nicely and looked sophisticated and the beautiful vest added the right amount of colour all whilst keeping it chic. This is the only look where I don’t really mind the shoes. 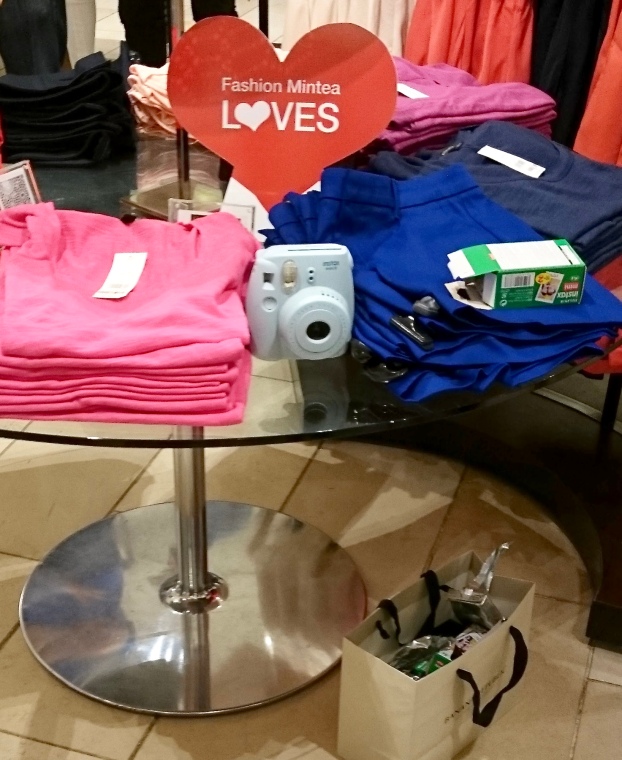 There was also a fun little Fujifilm draw at the end of the event where they would pick one polaroid photo out of all those taken with Yasmina, and the lucky winner would get a Fujifilm camera. Needless to say I didn’t win, but I do regret not taking my polaroid photo with me (the insta opportunities!).

All in all, I’ve had a blast and would definitely attend such a fun event again. I’ve made new friends and learnt a lot! Unfortunately, I forgot to ask the photographers where I could find the photos online, so I’ll keep that in mind for parties/events to come ensha’Allah (anyone who actually knows where to find them, please do let me know).

I hope you enjoyed reading this as much as I’ve enjoyed putting it together!

There was an error retrieving images from Instagram. An attempt will be remade in a few minutes.